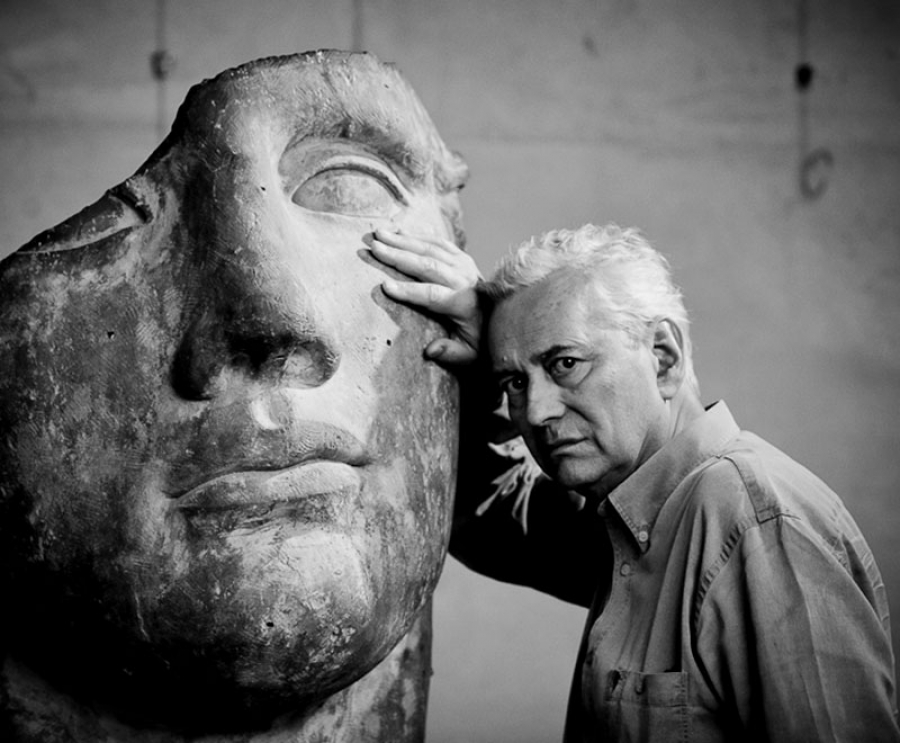 Igor Mitoraj was born in 1944 of a Polish mother and a French father in Oederan, Germany.
He spends his youth in Krakow where he studies at the Academy of Fine Arts. Under the tutelage of Tadeusz Kantor, he is introduced to contemporary artists such as Andy Warhol, Lichtenstein, Merz and Klein. In 1968 he arrives in Paris to continue his studies at the École Nationale Supérieure des BeauxArts (National High School of Fine Arts).
A lengthy stay in Mexico in the early seventies allows him to study South American and Aztec cultures. At this point, Mitoraj chooses to express himself artistically in the form of sculpture. In 1976, his first personal exhibition at the La Hune Gallery in Paris has an enormous success. He is awarded important prizes such as the “Montrouge Prix de la Sculpture” and is encouraged by the French minister of Culture who provides him with a studio at Montmartre. Mitoraj travels extensively, in particular to New York and Greece. After a visit to Pietrasanta in Tuscany, a sculptor’s paradise, the artist discovers marble as an ideal material for his sculptures, in addition to his previous use of terracotta and bronze.

In 1983, he chooses to make Italy his home and opens a studio in Pietrasanta, though he continues to maintain his Paris atelier. In 1986, Mitoraj accepts an invitation to participate in the XLII International Biennial Art Exhibition in Venice. In only a few years’ time, Mitoraj’s works of art are exhibited in many countries, often one-man shows as well as displayed in important museums. He begins to receive significant international commissions for his huge monumental sculptures both from private collectors as well as from the public sector. His works can be seen in London at the British Museum and Canary
Wharf, at Bamberg and Krakow, in Paris at La Défence, at the Uffizi Museum and the Boboli Gardens in Florence, in Piazza del Carmine and the Scala Theatre in Milan as well as in Rome in Piazza Monte
Grappa and Piazza Mignanelli.

In 2004, Mitoraj exhibits his monumental sculptures at the Tuileries Gardens of Paris, at the Mercati di Traiano in Rome and at the Royal Palace of Warsaw. In September 2005 with the city of Venice Civic Museums of Art and History inaugurates an exhibition entitled Mitoraj a Venezia, an exhibition of 21 sculptures, 16 of monumental size along with 25 inedited drawings.

Other points of interest even extended to Mestre on the mainland in the San Giuliano Park and at the Civic Center. The exhibition has a huge success.

In 2011 his monumental sculptures are exhibited in the beautiful context of Temple Valley, in Sicily, while in the spring 2012 the solo exhibition Memoriae is unveiled, during the “Ravello Festival 2012”, in the amazing location of the Amalfitane Coast. In 2014 an important event for the artist take place: an exhibition to inaugurate the monumental complex in Miracoli Square (Pisa).

The artist has worked between Italy and France until his death in Paris in October 2014.

Mito e Musica takes place in the city of Pietrasanta. In 2016, about thirty monumental sculptures are displayed in the prestigious archeological site of Pompeii, making his dream come true.